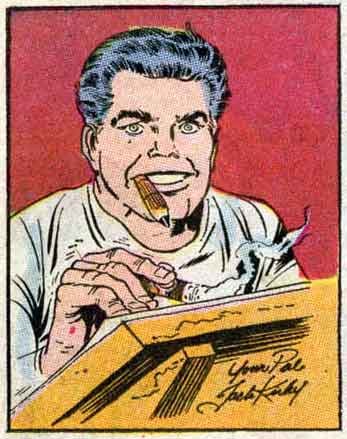 He created and co-created most of the MCU heroes we’ve enjoyed on the silver screen and on TV over the past few years: Captain America, Thor, Hulk, the Avengers, Spider-Man, the Eternals, and the Fantastic Four, just to name a few.

You might know that I’m a big fan of the late Stan Lee. Even after his passing, Lee remains the face of Marvel Comics since the early 1960s, and as much as I admire Stan’s immense creative work and talent, a debate has raged on whether Lee claimed more credit than he deserved. Stan was a writer, a visionary, and a self-promoter.

Jack Kirby was among the artists that Stan worked with to bring his vision to life.

And some, including Jack, would say that he, “King” Kirby, created the characters and heroes that we know and love.

I’m not here to settle that debate. I greatly admire both people.

Jack was a seminal graphic artist. He created visual worlds, large and small. He influenced countless other artists and creative people.

From reading his biography, I also have the impression that Jack Kirby was a tough guy. A real fighter. He grew up in a bad neighborhood, in a street gang, then he grew some more in the army during World War II, and he solved problems with his fists.

Jack Kirby’s art, I think, reflected that attitude. His characters were huge. His lines were bold and thick. His machines were staggeringly complex. His stories were larger than life.

And a lesson here is to let your personality shine through in your work.

Be who you are.

But here’s a warning: He couldn’t use his fists to get the credit that he deserved.

He couldn’t punch his way out of every contractual or creative issue he faced.

So another lesson from this is to have more than one tool in your toolbox. Having only a hammer does not make everything in front of you a nail.