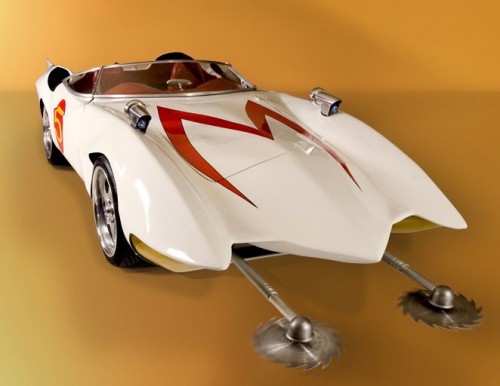 Creative solutions. You never know what’s going to happen, but you should also not allow yourself to be caught off guard.

Have you heard of Speed Racer, the cartoon about a young race car driver and his family? This was popular after-school fare in the United States. There was also a less popular movie not too long ago.

You might even remember his opening theme song (Go Speed Racer, Go!) and his car, the powerful Mach 5.

His car was equipped with lots of cool gadgets, including rotary saw blades that popped out from around where the headlights would be. Button C on his control panel, if I’m not mistaken.

While those amazing buzz saw would be handy for chopping through trees (on the race track?) you have to wonder what happened after Speed used those whirling blades.

They would cut through trees and other obstacles, but what about the stumps?

He’s going to drive right over those stumps, ruin his suspension, and shred his undercarriage.

Then, his race is over.

That’s one way to think about unintended consequences. What could possibly happen once your great idea is implemented? Think it through, all the way through!