You never know what’s going to happen, but you should also not be in a position where you’re caught completely off guard.

The question about the stumps was posed to me by William, old friend and coworker at the company I worked for before I returned to school. William was a big, genial guy with a quick sense of humor. He and my boss were friends and former sales reps too and they would sometimes as me to join them for lunch at Skyline Chili.

William could also catch me by surprise. One day, out of nowhere, he leaned over the wall of my cubicle and asked “What about the stumps?”

William asked me if I ever watched Speed Racer, the cartoon about a race car driver and his family that was popular after-school fare in the United States

“Sure. ‘Go Speed Racer, Go!’” I sang, repeating the familiar conclusion to the show’s opening theme.

“’…the powerful Mach 5’,” I interrupted, again referencing the opening song.

“Yes!” William seemed relieved that he found a fellow fan.

“Okay, remember how it could pop out rotary saw blades…” 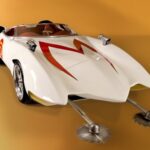 “Button C if I’m not mistaken” I added, referring to the control panel on Speed’s steering wheel. “Very handy when driving through dense forests…”

William continued. “Well, did you ever wonder what happened after Speed used those blades?”

I paused. “Maybe I have, but not for very long.”

William let out a note of frustration. “Well I have. I have wondered, what about the stumps?”

“Okay….” I knew now that, as is so often the case, I would learn more by listening than by talking.

“Those saws are at least several inches off the ground, so they’re not going to uproot any trees. That leaves the stumps, several inches high, poking out of the ground. He’s going to drive over those stumps, ruin his suspension, and shred his undercarriage.”

I nodded my head. “You’re right. I blame Pops.” Pops Racer, of course: Speed’s father and designer of the powerful Mach 5.

William laughed, extended his hand to help me out of my chair, and we walked toward my boss’s office to get his input on this situation. And lunch.

And THAT’S how I started thinking about unintended consequences. There is such a thing, per Psychology Today. In this article, Dr. Sherman takes a more scholarly look than any of Speed Racer’s adventures might suggest, so I’ll focus on example of my own.

In my earlier teaching days, I scheduled a midterm examination for my undergraduate marketing students. It was right there on the syllabus, the “contract,” as some might call it, between my students and me. That morning, the department copying machine broke down. We could not make copies of the exam and by the time I found out there was not enough time to find and take over another department’s machine.

So what’s the worst that could happen, I thought to myself, and who wouldn’t love a few extra days to study for an exam?

Take a second to run through your mind on “worst that could happen.” I’ll wait.

Well, have you ever spent a lot of time, moved a lot of things, put off friends and family, and essentially and unwillingly barricaded yourself in the preparation for an exam, presentation, project, etc.? Sure, who hasn’t? In college and high school we called it “cramming for the exam.”

After all that sacrifice and inconvenience and missed opportunity, there are many reasons why “the copying machine ate my exam” will NOT be happily accepted. The students didn’t want to wait. They worked hard and likely at some personal cost to take the exam NOW, not later. Plus there’s all the learning theory about how information that is crammed isn’t retained well. For many students it meant yet another cramming session.

So the unexpected consequences, the stumps left behind by my innocently-offered Mach 5 buzz saws, included a lot of resentment and some unkind words on my course evaluation. Not a career-crusher or an undercarriage-shredding  disaster, but also not the outcome I expected. Unintended consequences.

The lesson here is think through your decisions. Not just now, but consider the consequences that you might expect and even not expect, from people you know will be affected and maybe even some who you wouldn’t think about at first.

Beware the stumps, Speed Racer!  Your happiness is important to me and that’s why I do this.

I went to the #ACEComicon when it was in town last weekend. Comic books were central to my life when I was younger, from age 9-17 before I quit cold turkey when I graduate high…

The other day I was talking to a friend about the turnover he was experiencing in his department. He mentioned that he had the opportunity to conduct exit interviews with many of them but wasn’t…

I stopped at a local diner to grab some coffee, sit down and plan my day. It was early and the line to the counter was disorganized. Just as a path seemed to clear to…

For your next challenge, consider what you would do if you had all the resources you could possibly need or want. Apply a little bit of Brain Balm and see what you come up with….

Do you want others to trust you, to buy what you’re selling? Sometimes you have to absorb the cost of giving away a little bit of what you do or what you make in order…

Positively Horrible, Horrible Advice: Keep Your Head Down. Two questions: Do you like lists? I sure do, but I’m not a big fan of advice or to do lists expressed as a negative, as in…